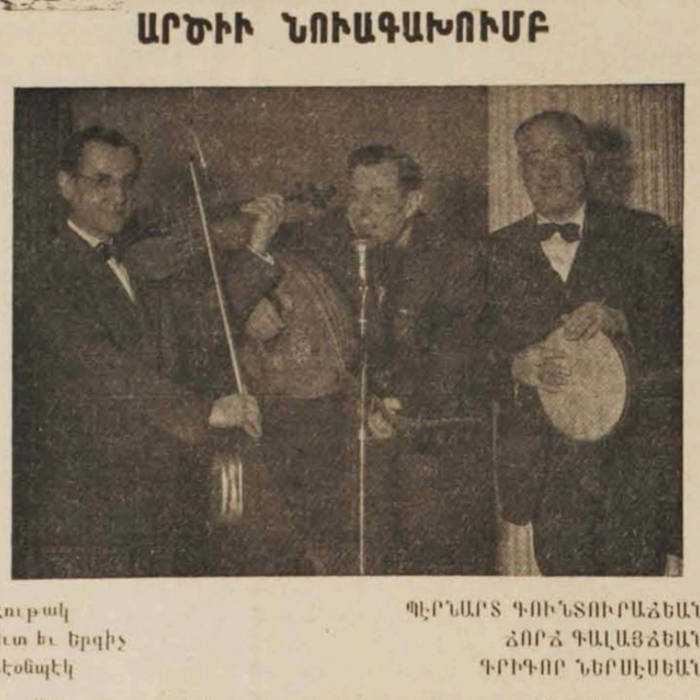 This collection represents the entire discography of the Arziv (“Eagle”) trio of Philadelphia, Pennsylvania who recorded and self-released discs in the 1940s. They were one of three Philly kef (“good time”) bands, along with the Gomidas and Vosbikian bands, to have recorded prolifically around the time. The songs are presented here in reverse chronological order of their release.

The group’s leader, violinist Haroutiun "Bernard" Kondourajian, who settled at 5244 Irving Street in Philadelphia, arrived from Aintab in Dec. 1913. He and his wife Violet, who was also a survivor of the genocide from Keyseri, apparently first worked in Troy, New York and worked with Garabed Merjanian, who had also settled in Troy. (See: canary-records.bandcamp.com/album/when-i-see-you-from-the-november-1917-recordings-nyc ). After settling in West Philadelphia, he ran a shoe repair shop for decades. (His last name, coincidentally, means in Armenian "son of shoe-maker.")

Krikor "George" Kalayjian (d. March 1952) was from Evereg, outside of Kayseri, and arrived at Ellis Island Dec. 1912. He first worked in Troy, NY, where he likely met Kondourajian at a shirt-collar factory. By 1930, he was living in Philadelphia, teaching oud, and running the Haigagan Club at 6011-13 Market Street, where he sold records instruments, records, etc.

Krikor "Tommy" Nercesian was from Kharpert; he arrived at the port of Philadelphia Aug. 1913.

The band split their time between Philadelphia and the “yogurt belt” of the Armenian Catskills resorts. Their drummer Tommy Nersessian wrote the iconic “Catskillin Yerke” about those resorts and was, in turn, the basis of the hit song “Come On-a My House,” written by the author William Saroyan and Ross Bagdasarian (widely known as “David Seville,” creator of Alvin and the Chipmunks).

The Arviz group toured through Pennsylvania, New York, and New Jersey, working closely with Edward Bogosian. (They appear to be his backing band on a number of sides. Tommy Nersessian is shouted-out on Bogosian’s records.) Their “Oghlan Oghlan” is a cover of the New Yorker Marko Melkon; and their “Soundin Bare” is perhaps the earliest “cover” of Edward Bogosian’s hit “Sood E Sood E.” They are likely the backing band on Bogosian’s original.

We are thankful to James Dorian, grandson of Bernard Koundourajian for permission to issue this group of recordings.
Further discussion of the Arviz band may be found at Harry Kezelian's blog: keftimeusa.blogspot.com/2013/11/oor-eh-hos-eh.html

Research and title translations by Harry Kezelian.
Transfers and restoration by Ian Nagoski.

Thanks to James Dorian, Harold Hagopian, and Paul Sookiasian.