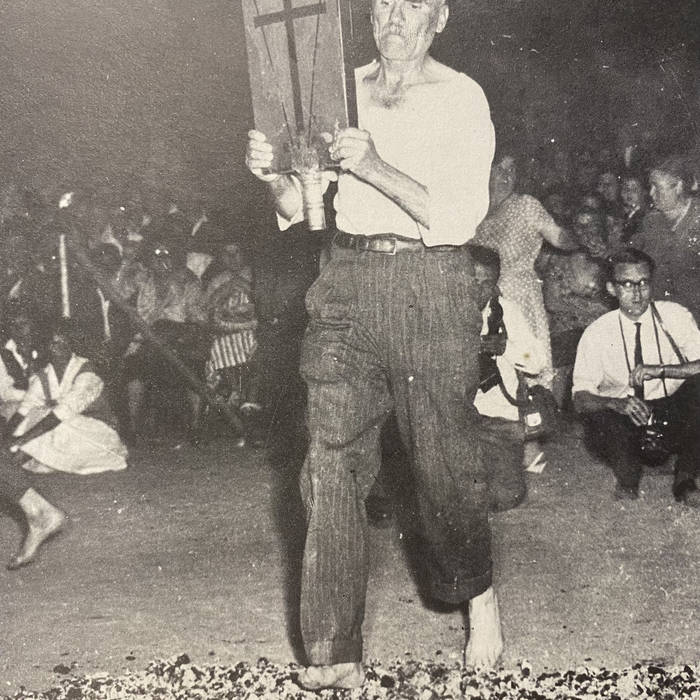 The subject of a significant body of ethnographic study, the practices of the Anastenaria of northeastern Greece have been a source of fascination due to their relationship to ideas of the survival of pre-Christian ritual and their cross-cultural connection to similar enactments of faith and courage performed in opposition of physical safety. Among Orthodox Greek believers in a few towns, in late-May a ritual on the feast days of St. Constantinos and his mother St. Helena, a three-day festival includes sacrificial slaughter of an animal, trance-dancing, handling of sacred icons, and walking on hot coals. The music connected with the rituals does not circulate widely but a scarce LP issued in Greece in 1974, issued here in its entirety, is a window into the festival.

Current scholarship (notably by Dimitris Xygalatas whose book The Burning Saints: Cognition and Culture in the Fire-walking Rituals of the Anastenaria, published by Rutledge in 2012, which is our primary source) recognizes that the rituals as they are practiced in Greece as having arrived from the Strandzha region of present-day eastern Bulgaria. Forced migration of Greeks from that region in 1913 following the First Balkan War resulted in the westward settlement of a population, including their elected elders who held secret knowledge, bringing elements of their culture with them into later several towns where the Anastenaria have persisted in regions northeast of Thessaloniki, notably Ayia Eleni, Langadas, and Mavrolefki. The disapproval of Greek religious authorities resulted in the ceremonies taking place in private until the 1940s when it was studied by Angeles Tanagras, an Athenian doctor with an interest in psychic phenomena. Continued opprobrium by the Orthodox church’s Holy Synod was matched by interest by anthropologists for several decades for roughly the same reasons; both viewed it as derivative of paganism, vaguely Dionysian, and somehow “orgiastic.”

For practitioners, the rite is deeply emotional and functions as a ritual of cultural memory and a demonstration of profound faith. The music played is comprised of traditional verses with standardized phrases played on two lyra (fiddles) and large drums that play rhythms drawn from dances of the Black Sea region from which the songs are derived mixed with other demotic sources. Included in this collection is a Bulgarian performance (likely a decade preceding the Greek performances and subsequently issued on an LP on the Balkan Arts label in the U.S.) of a dance still strongly associated with the possession-dance and fire-walking ritual and played on bagpipes. These performances and the rituals from which they're derived are an instance of something deeply persistent, although malleable in specific meaning, among a village-dwelling minority in a territories that have witnessed shifting ruling powers for centuries at least.

Tracks 1-11:
Original production by Dion. Meliopoulos and engineering by G. Konstantonopuolos.
The primary lyra player and singer, Dimitrios Lantzos, was born in 1930.
Track 12:
Untraced, possibly from the Balkanton label in Bulgaria, preceding its 1967 reissue on LP by Martin Koenig (who may be the recordist).

Alex Rita and Errol from Touching Bass feature in our special London edition of the Bandcamp Weekly.