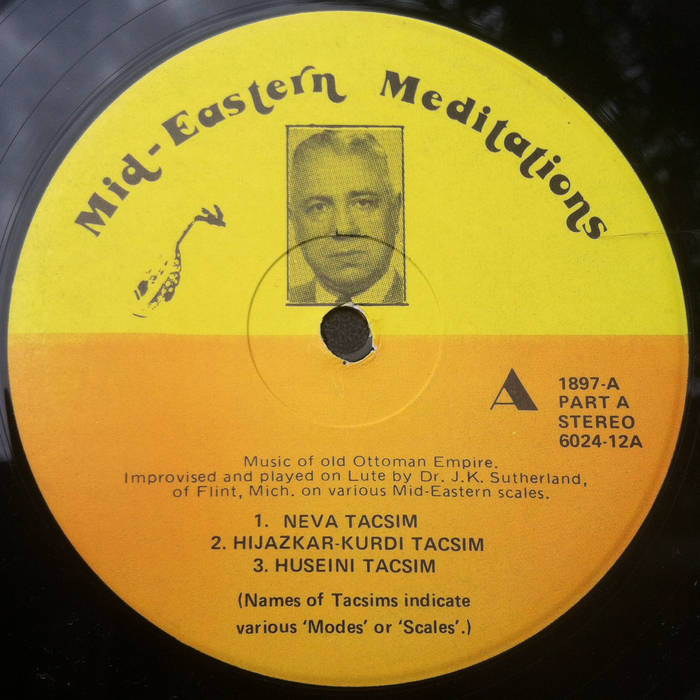 Around 1964, an aging and affluent doctor in Flint, Michigan used a substantial part of his fortune to publish two thousand copies of a memoir, beautifully bound in beveled boards and with gilt page edges, and a handful of sound recordings documenting his virtuosity on the oud and adeptness on the organ. His name was James K. Sutherland (born December 17, 1897), but he was born Hagop Lutfi Sarkissian in Kilis, present-day Turkey. He was the third child of parents from Aleppo, Syria, who had fled the Hamidian massacres of the mid-1890s six months before his birth.

His grandfather was from Aintab (Gaziantep) and born around 1840. His father survived a smallpox outbreak, studied medicine in Constantinople, and became a physician before relocating first to Urfa (Şanlıurfa) then Aintab then Birecik in southern present-day Turkey. His parents had to flee massacres, burying boxes of money and jewels before fleeing first to Aleppo and then to Killis. It was in that hurry that Dr. Sutherland - Hagop Effendi - was born. By 1910, there were six children in the family.

By 1903-04, they lived in a mansion in Killis, a town of 40,000, with four servants. His parents bought an organ for the family home, which Hagop began to play before his feet could reach the pedals, and he took lessons from one Kevork Khoja, who taught him Turkish and Armenian music alike. Unable to continue with the organ when he left for boarding school at the age of 12, he took up the oud. His childhood and education were deeply marked by the political upheavals and ethnic prejudices around him as well as contact with Turkish, Arab, Kurdish, Roma, Assyrian, German, and English neighbors, friends, and teachers.

From 1913-15, he attended Aintab College, but in August 1915, his family averted deportation by foot and arrived by hired carriage to Aleppo, only 50 miles from Kilis as “unwelcome immigrants,” he wrote in his memoir Adventures of An Armenian Boy. The family struggled to survive and witnessed the slaughter, starvation, and abuse of thousands of those around them, while teenaged Hagop narrowly survived typhus fever. But he continued to study oud with an older Turkish friend who had also relocated from Kilis to Aleppo, one Ghalib, eldest son of Hadji Mohammed Effendi. Through the late 10s, he worked as a health officer, interpreter during the English occupation, and in a pharmacy in Aleppo while playing oud at parties at night.

On March 5, 1920, he left behind his family in Aleppo for Beirut and from there to Marseille and then, on April 11, 1920, Providence, Rhode Island. Arriving without having eaten for three days, a customs official told him there would be duty on the oud he had brought unless he could play it. In response, he played “My Country ‘Tis of Thee” and was able to bring the instrument without tax. In short order, he moved first to Watertown, Massachusetts to his aunt and uncle’s address, and in early 1921, to Iowa City, “which I love so much now and was a fearsome torture chamber at the time,” he later recalled, to attend school while working menial janitorial, lawn-mowing, and dishwashing jobs. He completed his pre-medical degree in September, 1922 and his M.D. in June 1926. “Those six years made a man out of a boy,” he wrote. “It was a common saying: ‘I am 200% American. I hate everybody.’”

In 1924, he was engaged to his wife Helen (nee Jahnke, b. April 3, 1902; d. May 5, 1988). On June 10, 1926, he became a naturalized American citizen, at which point he changed his name to James Kay Sutherland, hoping to avoid discriminatory questions. Nearly 40 years later, he wrote, “Now, after having lived my life, I feel this was a great mistake […] one of the very few acts in my life which I now regret.” He interned in Salt Lake City, Utah, and accepted a position in Flint, Michigan in November, 1928. A Roosevelt Democrat, he ran for various offices there, from Coroner to State Senator, several times during the 1930s-50s in a largely Republican state.

Even as he practiced cardiology and surgery and had two children, he was an art collector - making local renown for having discovered an exceptionally valuable work from the Italian Renaissance. And he continued to play music, owning a 1694 Stradivarius and lamenting the lack of understanding of the music of Asia Minor in 1964 article for the British magazine, The Strad. It is unfortunate that we have not yet heard any of his violin-playing, if it exists on recordings. He self-released an LP of 19th century Armenian melodies on the then very modern Hammond solovox organ (produced 1940-48) on the right hand with piano ostinato in the left hand as well as at least two LPs of solo oud taxims. Hugo Strotbaum has discovered that Sutherland corresponded with the son of the great Ottoman musician Cemil Bey, inquiring about musical issues.

He died June 17, 1988 in Flint, Michigan. The detailed documents he left behind of his life remain to be studied in depth. His great-granddaughter Anna Fey St. George-Bond in England has written a forthcoming novel based on episodes from his life.

Transfer, restoration, and notes by Ian Nagoski.
Spellings in track listing have been retained from the original issue.