Get fresh music recommendations delivered to your inbox every Friday.

Zabelle Panosian: I Am Servant of Your Voice 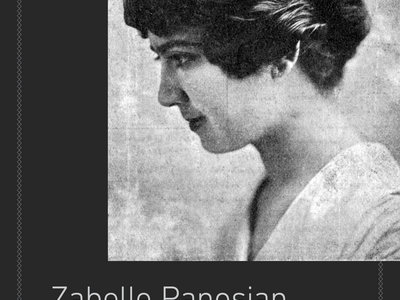 80 page book with over 50 photos and a 21 track CD.
Printed in Belgium by die Keure. Designed by John Hubbard.

"Zabelle Panosian sang one of the most amazing notes I've ever heard - so much humanity, sorrow, promise, infinite longing. When I write my novel the main character will be Zabelle's note."
-David Harrington, Kronos Quartet

"Please listen to the Armenian singer, Zabelle Panosian. [Her ‘Groung'] is a secret song that steals away the breath of those who are fortunate enough to hear it." - Susie Cave

"A carefully crafted and detailed, yet succinct biography. Many of us were introduced to Armenian-American singer Zabelle Panosian’s soul-jolting rendition of “Groung” via the 2011 release of To What Strange Place, but here, in Zabelle Panosian: I Am Your Servant, for the first time, we travel with Panosian from her birthplace in Bardizag to her home in New York. We are there in the studio with her at Columbia Records for her historic recordings in lower Manhattan, and we stand with her in the radio studios of WEAF. We become readers of reviews of Panosian’s concerts both celebrated and scathing. We accompany her on performances, minuscule and grand from Waterford to Providence and San Francisco to Fresno, eventually recrossing the Atlantic with her to sing in France, Italy, and Egypt. More than a singer or performer, we learn of Zabelle, the estranged sister, the loving aunt, and the mother who passes the baton to her daughter, Adrina Otero, completing what will be the starting point for future historians or ethnomusicologists wishing to explore Zabelle Panosian and her legacy.”
-Richard Breaux, Associate Professor of Race, Gender, and Sexuality Studies, University of Wisconsin-La Crosse

Among the most significant Armenian singers in the early twentieth century, Zabelle Panosian made a small group of recordings in New York City in 1917-’18. Unaccountably, she was then largely neglected as an artist for more than half a century. This volume by three dedicated researchers is the first effort to reconstruct the life and work of a woman who had an exceptional and cultivated voice — who toured the world as a performer and made a significant contribution to the cultural lives of the Armenian diaspora, the elevation of Armenian art song, and the relief of survivors of the Armenian genocide.

Panosian’s music is derived from a syncretic experience of the Western Armenian village near the sea of Marmara where she was born and a passion for the coloratura sopranos she encountered in Boston. As an immigrant carrying the traumas of dislocation and the loss of her home, she transformed her grief into action, dedicated her life to an expression of the greatest art she could imagine, both from her former life and her new life in America, and she created a path in her wake for her daughter to become a renowned dancer.

Tracing her story from the Ottoman Empire to New England, from the concert halls of Italy, Egypt, and France to California, Florida, and South America through two World Wars, the story of Zabelle Panosian is that of a serious talent recognized and celebrated, dismissed and forgotten, year by year, waiting only to be known and loved again.

Includes unlimited streaming of I Am Servant of Your Voice: March 1917 - June 1918 via the free Bandcamp app, plus high-quality download in MP3, FLAC and more.