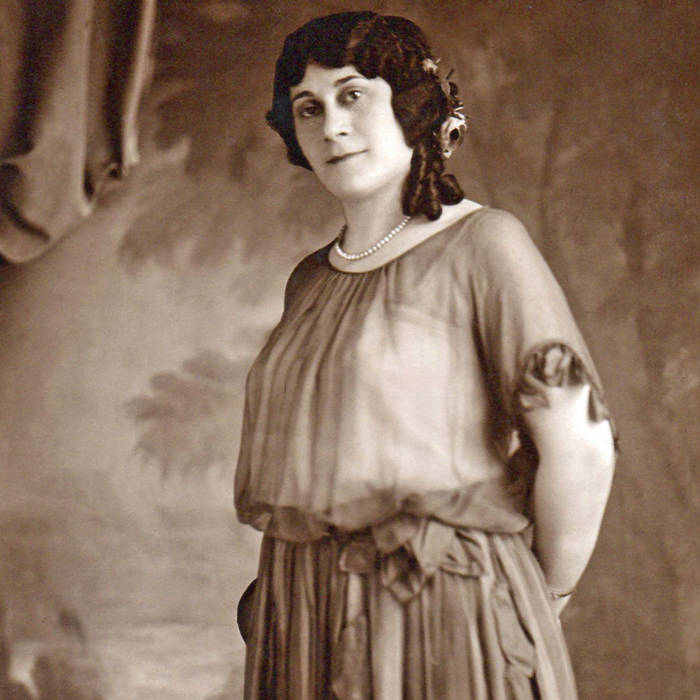 Eleven songs that Mary Steele recorded between October 1919 and ca. May 1921 were released on discs. This collection includes seven of those along with two sides by her sometimes accompanists, the Antoniou Brothers. She was one of only only four women to have recorded in the Turkish language in the U.S. in the 1910s and 20s (the only one who wasn’t Greek, it turns out), the second woman to have recorded in Arabic, and the only woman to have recorded in Albanian. Phrases in both Armenian and Kurdish turn up in her recordings. Because of her broad linguistic capabilities and her Anglicized name, she baffled me for years - who was she? where was she from? - and I would not have known anything substantial about her had I not been contacted by her great-grandnephew Rob Steel. He has done a lot of research on her, providing a basis from which I could do some more investigation. What follows is an amalgamation of what we have learned.

Mary Steele was born in Mersin, Turkey February 21, 1887, the sixth of eight children. Steele’s father was Hanna Luke Boulad, born July 15, 1856 in Aintab (now Gaziantep) in southern Turkey who came from a Melkite Catholic family. While attending a Presbyterian missionary college in Mersin he met Mary’s mother Freda, a fellow student, who had been born in Aleppo, Syria August 31, 1860. They were married and had their first child Phoebe in 1875 in Gaziantep. Over the next 25 years, Hanna took various teaching jobs back and forth from one city to the next, spending a few years in Mersin, a few in Gaziantep, then Tarsus, then back to Gaziantep, then Mersin, back to Gazientep, back to Mersin, then finally, by 1900, to Beirut by which time they had eight children, all boys except Phoebe, the oldest, and Mary, who was then 13.

At the urging of a missionary neighbor in Beirut, an American Consul named Dr. Metheny, they sent their two eldest sons, Saul and Alex, to the U.S. In 1901, then sent two more sons William and John. By 1902, Freda Boulad was disconsolate at the breakup of her family, so, with sponsorship from the Presbyterian church, Hanna sold his possessions and packed up the family of including his wife, two small boys,15-year-old Mary, her older sister Phoebe, and Phoebe’s husband and two children, and they sailed from Beirut to Marseille to Philadelphia, arriving August 13, 1902.

The family settled in south Philadelphia. By 1910 56 year old Hanna had left behind the life of a scholar and was working as an upholsterer, living on Glenmore Ave. with his wife, a 27 year old son Joseph (also in upholstering), his wife Christine and their two children, and an 11 year old son Benjamin (working in a soap factory). The family name Boulad (meaning, roughly, “strong” in Arabic) had been changed at the port to Steele, and Hanna was called John. His gifts for language were utilized periodically, including, according to family lore, consultation with Egyptologist Dr. Howard Carter (best known at the discoverer of Tutankhamen’s grave), but he resigned himself, unhappily it seems, to American life.

While most of the family stayed settled in the working-class south Philly suburbs of Glenolden and Collingdale for decades, Mary Steele traveled. Family documents refer to her having been married at 14, but the first marriage we’re fairly sure of is to one William Gladstone Richardson in January 1912 in either Iowa City or Chicago, depending on which document can believed. Richardson was Mary’s age, 25 at the time, and a native of Farina IL. They apparently had a child and were still married and living together in St. Louis, Missouri in 1920. Richardson he died in 1958, now buried in Ronan, Montana.

Steele seems to have spent the better part of 30 years living the life of a performer on the road. She turned up in in New York City at the age of 32 for six recording sessions for the Victor company from October 2 through December 24, 1919. Accompanied by a portly pair of cymbalom- and clarinet-playing Greek brothers from Samos (an island that remained a semi-independent Ottoman territory until it was repatriated to Greece in 1913 during the First Balkan War), she initially recorded four songs in Arabic. The first disc was given a write-up blurb in Victor’s Arabic catalog of the time:

“The first selection ‘My Rose’ tells of a youth’s ardent admiration for his sweetheart whose beauty he compares to the rose. In the song on the reverse of the record, ‘Father I Want to Get Married,” a girl confesses to her father her love for a blind man and she tells him that even his misfortune will not detain her from marrying him. The composer, Mme S. Mary, a new Victor artist, sings these Syrian melodies to the accompaniment of cymbal and clarinet.”

A few days later, the Antoniou Brothers made four instrumental sides which were released as part of Victor’s Greek series, two of which include Steele playing percussion (and on one of which she can be heard shouting encouragement to the players in the background). The trio returned to the studio every couple weeks over the next two months, cutting four songs in Greek and Albanian over and over again. Victor’s recordists must have thought they had something special in Steele as a performer to let her cut the song “Cuchawaki (The Gamblers)” a total of fifteen times, “Ismenyes” twelve times, and “Ardhi Koha A Bekuar” eleven times during a period when most immigrant musicians got only one or two takes to complete a performance for release. Only the latter of those three songs, translated from Albanian as “Hurrah for the Nation” was ever issued with “Flamuri (The Flag)” (completed in three takes) as its flip, likely as an attempt to salvage something salable from the sessions. The disc sold poorly, which is unsurprising given that the Albanian-speaking population of the U.S. numbered only a few thousand at the time. (Notably, Victor only ever issued four other discs in Albanian, all recorded in 1917-18 by Giuseppe Mauro with accompaniment by the house orchestra before trying one last time in 1924 when they issued five songs by Adreas Pappas-Athanas Mone.)

Around March of 1921, she recorded again, this time with a new band for Columbia at their Woolworth Building studios. In two sessions, she knocked out five songs in a combination of Turkish and Arabic in one or two takes. One of the songs was issued as the flip side of a song by Marika Papagika (one of the rare instances of Papagika singing in Turkish). After her session in May 1921, she never recorded again.

The 1930 census found Steele living with a Greek man named Stelianos Grigorlides at the New Jackson Hotel in Chicago’s Greektown, giving her occupation as “dancer” and her language spoken other than English as “Armenian.” May 1931, she married an Athenian named George Zamanos in New York City, but it didn’t last. By 1935, at the age of 48, she heeded the family call and moved to Jacksonville, Florida to take care of her then-widowed mother Freda. Her brother John (b. 1886) died that year; Alex (b. 1882) had died in 1915. While she was there, she filed her Declaration of Intent to naturalize as a U.S. citizen, having lived as an alien in this country for 35 years. She gave her race and nationality as “Armenian.” We can only speculate that as a Christian from Turkey, having lived among Greeks and Armenians in nightclubs, theaters, and coffeehouses for decades, her identification with those groups was stronger, or potentially easier for mainstream America to comprehend, than with her Arab family. Or perhaps her mother was Armenian?

By 1940, Mary Steele had resettled closer to her remaining family in south Philadelphia at 2535 67th St. living with an Armenian rug cleaner named Harry Hachrian, who was listed as a lodger in a house she owned. She gave her marital status as “widow,” but in March 1944 she filed a summons for divorce against George Zamanos in Nevada, apparently the last place she knew that he’d lived.

Her younger brother Joseph, born Sept. 6, 1895 in Gaziantep, also wound up working in show-biz as Ingrid Bergman’s business manager. In 1959, he published a memoir titled Ingrid Bergman: An Intimate Portrait. He died in 1980.

Antoniou Brothers are the accompanists on tracks 6 & 7.
Mary Steele plays castenets on track 8.

Primary research and cover photo from Rob Steel.
Further research, notes, transfers and restoration by Ian Nagoski.
Thanks to Martin Schwartz.
Thanks also to Christine Gabaly for her contribution in memory of her grandparents Setrak and Siranoush Aijian.