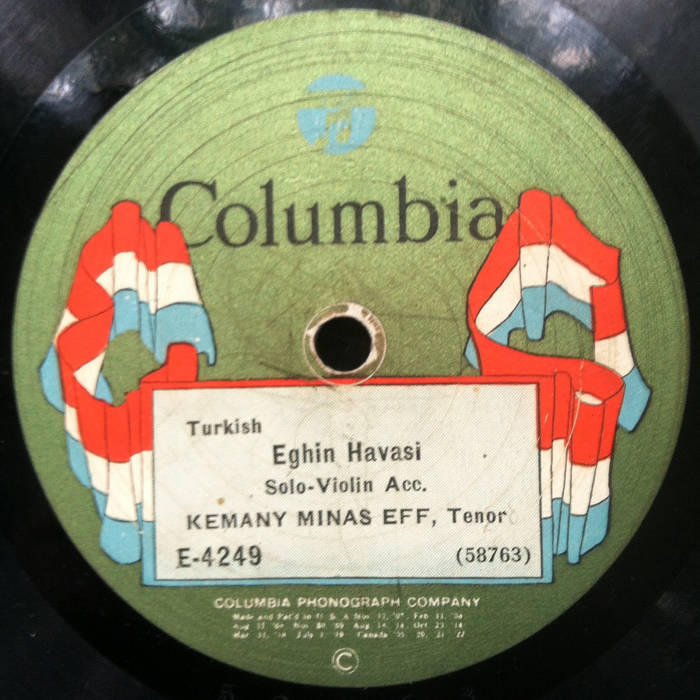 christinelisa Thank you for bringing this music back to life!

For a decade, I said that we will never know who Kemany Minas was, since the name Minas is common and “kemany” simply means “great violinist." I said that there was no way to find such a person.
Well, that turned out to be wrong.

In 2018, Harout Arakelian and Harry Kezelian located a group of documents that clearly show a great many details of a life that appeared at first to have been Kemany Minas. His biography, based on those documents goes something like this:

He was born in Arabkir, Harput (present-day Arapgir, Malatya, Turkey) on June 15, 1862. He used two names, neither of them his exact birthname. The first, Minas J. Kousanian, is derived from the Armenian for “troubadour,” kousan. The other, Minas K. Jeremy is apparently an Anglicization of his family name. He arrived in New York City on October 20, 1895 and moved to Massachusetts around November 2 of that year. His wife Zanazan (maiden name Ajemian) was also born in Harput around 1858. Their son Harry was born September 22, 1889 and played violin. When he was naturalized on December 1, 1906, he was living in Malden, MA and was a rubber worker (as were both of his witnesses), likely at the Boston Rubber Shoe Company, founded by Marquis Mills Converse. (He was also a member of the Masonic Lodge in Malden.)
He died, aged 58, on June 3, 1918, about six months after these recordings were made pernicious anemia. (His son Harry died of tuberculosis June 23, 1920. Another son, Karekin, born in 1897 died in 1898.)

But then at the end of 2019, Kezelian turned up for information about another Minas entirely.
Minas Chaghatzbanian, born ca. 1887 in Malatya, arrived in the U.S. July 13, 1913 and headed at the time of his arrival to Providence, Rhode Island. By 1914, he was living in Boston and performing at the Arevelyan Srjaran (Oriental Coffeehouse) operated by Bedros Boyajian on Harrison Ave. A June 24, 1914 ad in the Armenian-language newspaper Azk (The Nation) discovered and translated by Kezelian reads: "In the coffeehouse, the famed violinist Mr. Minas Chaghatzbanian will play choice Oriental pieces. Call the Chaghatzbanian Band for weddings, picnics, and other celebrations." That performer coincidentally happens to have died March 14, 1918 in Placer, Fresno County, California, only about four months after these recordings were made.

The two were born 25 years apart in adjacent, regions.
Kezelian, who has an exceptional understanding of both late-Ottoman geography and repertoire, is utterly convinced that Chaghatzbanian is the Kemany Minas of the recordings and he has presented a great deal of important detail in support of his feelings. I am deferential to his expertise. Ultimately, the resolution of the question hinges on two factors:
1) Their ages. Are we listening on these recordings to a man who is 30 years old or are we listening to a man who is 55 years old?
and 2) Their repertoire. Would a man of 55 have had a repertoire that included what Kezelian has described as the “hit parade of Istanbul ca. 1910?”
And then, what exactly is the relationship of the performer to the historical event described in the song “Eghin Havasi?”
The answers to both questions would seem to indicate that 30-year-old Minas Chaghatzbanian made these recordings and moved to California and died in the four months that followed having made them.

Minas’s powerful recording of “Eghin Havasi,” the ballad of the September 15, 1896 massacre of Armenians in the village of Egin (present-day Kemaliye) near the Euphrates by the Ottoman military, was an enduring hit and likely one of the two best-selling recordings in Turkish in the U.S. during the early 20th century (along with Achilleas Poulos's 1926 recording "Nedem Gedem Amerikaya"), having gone through several pressings and staying in print for 15 years into the early 1930s. The tragedy it memorializes included the burning of two thirds of the Armenian homes of the village of Egin and the killing of 1,500 of its residents. Egin was not far from where Minas was raised. The tragedy occurred one year after Kousanian arrived in the U.S. and 17 years after Chaghatzbanian arrived; Chaghatzbanian would have been about 9 or 10 years old at the time of the catastrophe.

Kemany Minas first recorded at the December 5, 1916 sessions for the Victor Records sessions of Karekin Proodian, where he made six sides an accompanist and a further half-dozen as a soloist. In November 1917, he and the oudist Garabet Merjanian collaboratively recorded a total of 19 sides over several sessions for Columbia at their Woolworth Building studio, of which we present here 14 sides along with two improvisations by performers who apparently attended the first of the recording sessions and one of who played on two of the Minas-Merjanian sides.

Harry Kezelian has identified the clarinetist Takis Zakas as Mesrob Takakjian who continued to perform on records through the 20s as a duo with the Greek lauto player M. Gaganes and likely performed through the 30s. The other player, credited as Tamboury Looder, Kezelian says, was Looder (Luther) Hampartzoumian who arrived at about age 20 in the U.S. from a village in Kayseri on Dec. 27, 1908, having left behind a wife. His career was in repairing oriental rugs. He served briefly in the U.S. armed services in WWI but was dismissed as an "enemy alien," because he was still a citizen of the Ottoman Empire. His wife died in the genocide in 1915. In 1920, he went to Smyrna and remarried a woman named Sara with whom he had a daughter named Annitsa. The family survived the Great Fire of Smyrna in September 1922 and moved to New York in November of that year, where he changed his surname to Artinian, and settled the family on East 27th St. in the heart of what was then Little Armenia. By 1930, they moved to Queens, where he continued to perform through at social functions. Harry Kezelian points out that his instrument on the only two sides on which he performed was not a classical tambou" but a folk variant, generically referred to as a saz. Looder died July 20, 1951.

Commercial Turkish language recording in the U.S. only began in 1912 and by about 1919, both major companies – Victor and Columbia – had ceased recording Turkish-language material. Several independent labels run by Armenians quickly entered the marketplace and continued to present the community's music on discs. These performances, recorded acoustically six years before the invention of microphones, are presented here simply in the order in which they were recorded.

Many thanks to Christine Gabaly for her contribution in memory of her grandparents Setrak and Siranoush Aijian.