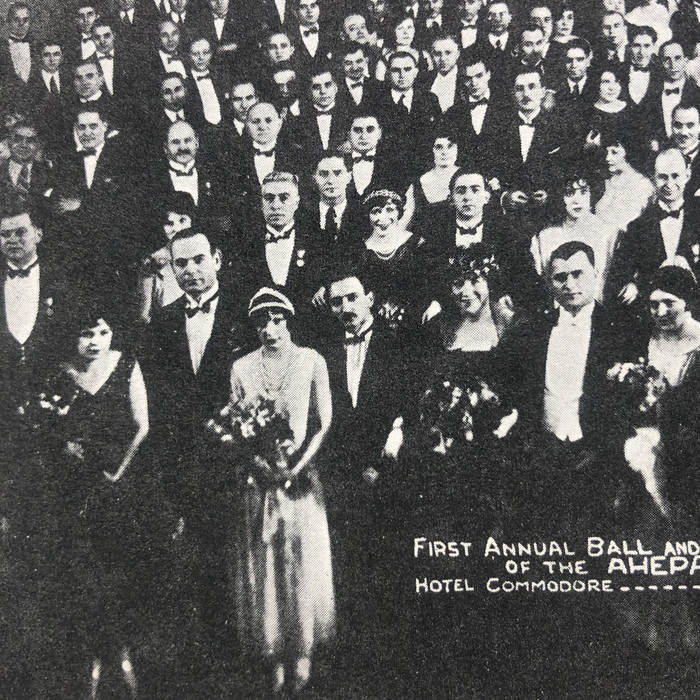 When Canary released an LP of Marika Papagika titled The Further the Flame, the Worse it Burns Me in October, 2010, the last line of its accompanying biographical notes was: “This work remains unfinished and ongoing. Corrections and additions will be received with gratitude.” In the decade that has passed, a lot of new documents have become available online and some significant research has been published, notably the slim book by Panyiotis Kounadis with his daughter Elita that includes more of Papagika’s family background and the two photos of her with her husband. These notes will go some way toward correcting mistakes that I made in the Further the Flame and will fill in some of the gaps with what is now knowable.

While her death certificate lists her father’s name as Anastasis Katsoris other documents give his surname as Katsaros. Similarly, her mother’s name Anthoula Monduco appears elsewhere as Anthoula Anthos. Her place of birth on her death certificate, the island of Kos, is contradicted on her 1939 Social Security application, where it is given as Constantinople and gives her date of birth as Sept. 10, 1890. (Several other dates in 1890 also appear on various documents.)

In 2019, a researcher named N. Nikitaridis presented documentation online that appears to show that Marika had moved with her family before the age of 10 to Alexandria, Egypt, where she married Costas Papagikas circa 1909. Costas's dates of birth also vary across documents, ranging between June 1, 1882 and August 8, 1883. He consistently listed his home as either Martino or Lamia, towns about 90km from one another in the central Greek district of Phthiotis. Nikitaridis’s work also showed through newspaper documentation that Marika Papagika held at least a dozen residencies as a singer in a half-dozen venues in Alexandria between March 1913 and April 1914: Lazaropoulos’ coffee shop, Barzadaki, Kassandra, Casino Lyon, and the Tornadazaki Cafe among them. Clearly by her early 20s she was a seasoned and popular performer in the Greek-Alexandrian community.

Researcher Hugo Strötbaum found documentation in the EMI Archive in Hayes that Marika and Costas Papagikas recorded six performances for the Gramophone Company in Egypt in December 1913 or January 1914. (Relying inadvisably on my memory, I believe that single copies of two of those discs are now known to exist.) On April 22, 1915, they arrived at Ellis Island, joining the wave of 351,720 Greeks who came to the U.S. between 1901 and 1920 at a time when Greece’s population was less than 2.5 million. They told immigration officials they would go to Chicago, where over 20,000 Greeks had already settled around Halsted Street and Blue Island Avenue. (About as many Greeks were in New York, spread out over Manhattan and Brooklyn.)

Their path over the next three years remains unclear, but by 1918 they were living at 159 W 31st St. in Manhattan. In July of that year, they cut a trial recording at Victor Records’ New York studio and then, December 4th of that year they cut four sides that were released. (The first of those was a take of “Smyrneiko Minore,” which they recut eight months later with a different violinist. The earlier take is included as the final track of this collection.) The only print documentation to have come to light of their performing careers in the U.S. is a February 16, 1919 appearance at the Olympic Theater on 5th Ave. in Pittsburgh, PA. The event was held between armistice at the close of World War I (Nov. 11, 1918) and the signing of the Treaty of Versaille (June 28, 1919) and was a call on the Allied peace authorities to unify Greece with the territories of Northern Epirus and the Dodecanese Islands which were at the time still under foreign rule. Following a series of speeches, Marika (using her Americanized name Mary) stood between photos of President Woodrow Wilson and the Greek Prime Minister Eleftherios Venizelos and sang several songs in Greek including a translation of the popular 1917 American war song “Over There.”

It would be difficult to overstate the role of Panhellenism in Papagika’s artistic output and career. The early decades of the 20th century when Papagika came of age as a performer were a period of constant political upheaval and brutal conflict for Greece - the Cretan Revolution, two Balkan Wars, World War I, the Greco-Turkish War, a military coup, assassination attempts, territorial expansion, endless scandal and intrigue in the government and military, and the ultimate collapse of the monarchy when the last king died at the age of 27 from the after-effects of having been bitten by a monkey, all in less than 30 years and in the context of almost constant financial ruin. A desperate sense of bound unity among Greek-speakers became the basis for both political and artist endeavor for Greeks. As W.H. Auden wrote of Papagika’s Greek-Alexandrian contemporary, the poet Constantine Cavafy, “In [his] Panhellenic world, there is one great object of love and loyalty of which defeat has not deprived them, the Greek language.”

Among her earliest recordings for the Gramophone company were patriotic songs referring to the Balkan Wars, and songs of patriotism and Greek pride, in one form or another, remained a steady baseline of her discography. Apart from her patriotic performance at the Pittsburgh conference and promotional material issued by her record labels, the only other print evidence we have of her in the U.S. is her appearance in the front of a 1924 photograph taken at the first annual ball of of the Metropolitan New York City chapter of the newly-formed Order of the American Hellenic Educational Progressive Association on December 15, 1924. The event took place at the Commodore Hotel at 109 E 42nd St., less than twelve blocks from 215 W. 34th St. where Marika and Costas were living at the time. In the photo (used as the cover to this collection) Marika wears a similar headdress as the one she wore for a photo used as the cover photo for a 1921 Victor Records catalog (found by Strötbaum). Behind her to her left is Costas in his ever-present pushbroom mustache.

In the same photo, behind Marika to her right stands a significantly taller man. It is my guess that this is the only known photo of her most consistent accompanist barring Costas, the cellist Markos Sifnios. (Marika’s Ellis Island documentation gives her height as 5’3” and Sifnios’ draft registration states his height as 5’11”.) Sifnios, who was born March 10, 1886 or 1887 in Latomi on the island of Chios, appeared on the vast majority of the Papagikas recordings. He left behind an ex -wife and two children (born 1906 and 1909) on Chios, lived for a while in Djibouti, and ultimately arrived in the U.S. on a boat from Shanghai to San Francisco in July 1917. By September 1918, he was living on W. 31st St., one block down from the Papagikas and was earning his living as musician. When Marika and Costas lived at 215 W 34th St. in the mid-20s, Sifnios moved to number 253 on the same block. He performed with them from their first trial disc in July, 1918 through December of 1928 on nearly all of the 200 recordings they made in New York over the course of a decade. They were, it seems, very close. His death on April 5, 1929 around the age of 41 marks, as much as any other date, the end of the Marika and Costas Papagikas as prolific and popular recording artists. They cut only eight more sides in first half of 1929 without him before going into retirement from recording for nearly a decade.

In early 1930, Marika’s widowed older sister Stamatia Corneliou (or Stamatea Cornelio) emigrated to the U.S., quickly settling on Halsted St. in Chicago, where she ran a boarding house for immigrant laborers and waiters (from Mexico, Spain, Sweden, as well as Greece). Meanwhile, by April 1930 the Papagikas bought a house at 198 Sea Ave. in the largely Italian Arrochar neighborhood of Staten Island for $7,500 (about $117,000 in current money - a significant gain from the $40 they carried when they arrived 15 years earlier). Living with them was one Angelo Basil Greggo, a waiter who’d been born in 1894, emigrated in 1910, and served as a private with the U.S. forces overseas during WWI. (A census enumerator was told that Greggo was both a nephew and a musician like his hosts. We have no reason to believe that either claim is true.) Greggo continued to live with them when they moved to 198 Lily Pond Ave., two doors down from their close friend, the record producer and singer Tetos Demetriades, in the Rosebank neighborhood of Staten Island about a decade later.

Demetriades had lured them out of recording retirement to make four final sides with Marika singing in February and March 1937. Shortly afterward, of nine sides recorded by Costas in July and September, 1939 only two, bearing little resemblance to his 1920s performances, were issued. (Demetriades was listed as Costas Papagikas’s contact on his WWII draft registration card.) Whether these six issued sides were made in generosity toward the Papagikases or as a boost to other musicians using their famous names or some combination, we can't say. In any case, they did not sell well.

July 15, 1943 Marika went to the Staten Island Hospital. She died there less than three weeks later on August 2, the result of a cerebral hemorrhage and heart disease. The following day, the Staten Island Advance announced her death somberly without mention of her performing career, stating that her funeral would be held the following day at Casey Funeral Home and Holy Trinity Greek Orthodox Church. She is buried in Silver Mount Cemetery, Sunnyside, Staten Island. Her headstone reading “M. Papagikas” gives only her date of death and age as 52.

Costas Papagikas’s death from heart disease Oct. 12, 1947 was reported by his niece, Euryklia Staurakuli (whose husband Theophanis had worked in the 1920s at the Hellenic Phonograph Company at 532 8th Avenue.) They had no children. Their friend Angelo Greggo died in Avlonas, Attica in Feb. 1967 and was interned there in his family’s vault.

Among the proliferation of reissued recordings of Marika Papagika, particularly online, a remarkable number have remained unavailable. Partially this has to do with contemporary stylistic preferences for material that fits the image of Marika as a performer of proto-rebetika or Smyrna style music, while a substantial amount of her output was theatrical or in then-popular styles (like tangos, which were enormously popular among Greeks in the 20s) that are now out-of-favor. And partially, it has to do with the fact that the majority of her recordings were made “acoustically” before the advent of microphone recording and survive in disc form in widely mixed states of audio fidelity. This collection, including new transfers of several ubiquitous performances, also includes some that have been unavailable for nearly a century. Hopefully it inches us closer to a clear picture of one of the most gifted immigrant musicians in America’s history.

Cover photo from the first annual ball of the American Hellenic Educational Progressive Assocaition at the Hotel Commodore, Dec. 15, 1924.

All songs recorded in New York City. All are in Greek except track 6, which is in Turkish.

Transfers, restoration, and notes by Ian Nagoski
Thanks Bilge Yalçındağ