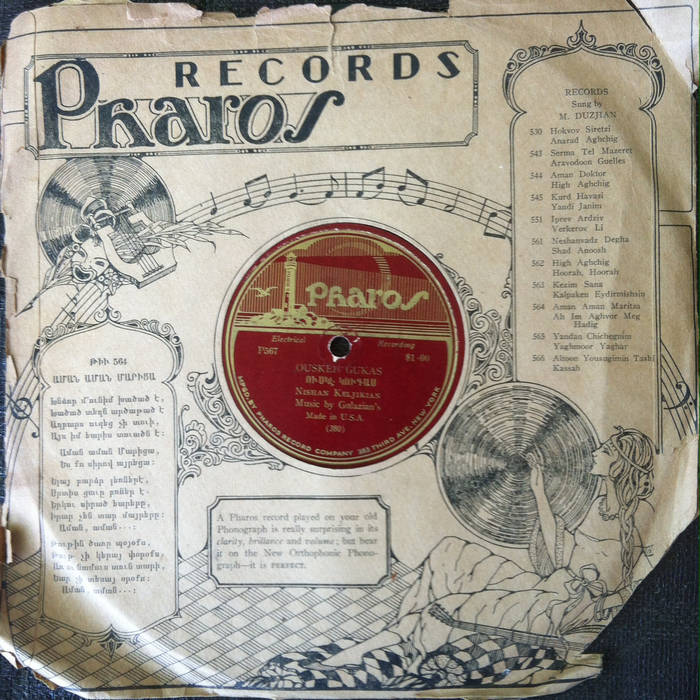 This second of two hour-long collections is not in any way comprehensive but focuses on the Pharos ("Lighthouse") label founded out of the jewelry and watch repair shop owned by the Vartesian Brothers at 383 3rd Avenue in the heart of what was then Manhattan's Little Armenia. The shop distributed discs on the earlier Armenian independent labels around New York (see volume 1 in this series). Their Pharos label reissued discs recorded a few years earlier on the M.G. Parsekian and Sohag labels but, in the period 1927-28 built a strong catalog of newly-recorded material. By 1928, Pharos had released 44 discs in Turkish and 20 in Armenian. Much of the Armenian material was recorded by two singers, credited as M. Douzjian and E. Bogosian.

Douzjian only recorded 14 songs for Parsekian and Pharos in his brief career on discs, and he has remained mysterious. (Two performances from Pharos discs presented here open with announcements that they were recorded for the short-lived Yildiz label.) A 1930s directory shows a Douzjian named Mugirdich then living in Union City, New Jersey. If that’s him, then he was born in 1896, emigrated in 1921. His material encompasses both the overtly erotic and the deeply patriotic. (Harry Kezelian notes that Douzjian’s recordings “Verkerov Li” and “Iprev Ardziv” are dedicated respectively to the Armenian revolutionaries Bedros Seremjian and General Antranik.)
It is also unclear who accompanies him on violin on his records, but it does seem reasonable to guess that it might have been Nishan Sedefjian, a diamond setter at the Vartesian Brothers’ shop, and a superb violinist who recorded for the label as well as many performances with the great Greek singer Achilleas Poulos.

Edward Bogosian (born Yetvart Boghosian) is credited on his Pharos recordings as a “comic.” Born in 1900, he began his career in the musical theater in his native Constantinople. He arrived in the U.S. at the age of 20. He traveled the eastern U.S. cities performing in musical theater troupes, presenting his trademark off-color, satirical, and frankly populist songs. He recorded 12 sides for Pharos in the 1920s and another 30 sides in the 1940s-50s for the Metropolitan and Balkan labels. Harry Kezelian points out Bogosian’s serviceable voice and almost childishly simple melodies are aided in his latter-day recordings by the accompaniment of excellent performers including Marko Melkon and Nick Doneff.

Harry Kezelian has also made a forthcoming study of Nishan Keljikian’s “Ouskeh Dukas,” a uniquely pointed song in protest of the quota system in American immigration policy. (One can clearly hear the English phrase “melting pot” among the lyrics.) Keljikian (b. ca. 1886-7; d. 1962) emigrated in 1911 from the Harput (Kharput) region of eastern Turkey. He lived in Massachusetts and worked as a surveyor for the city of Medford.

Endless thanks to Harry Kezelian. Check out his web site for more music and information: www.armenianmusicpreservation.org/2014/03/06/welcome-to-amp/