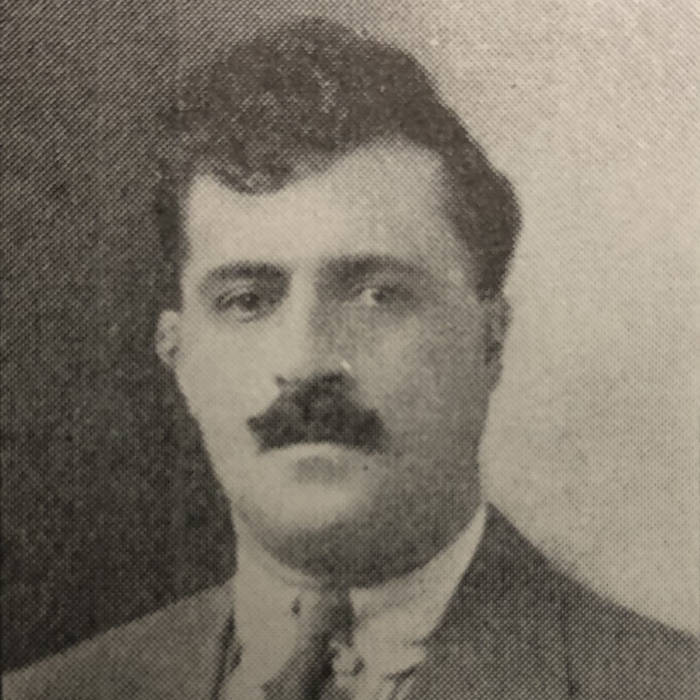 Robert Bloemkolk I love what Canary Records puts out. See my comments on their monumental sampler: 'To what strange place'. Buy it. And than tune in to this guy. What a voice. Singing to you from a century ago. Favorite track: Drousoula (Morning Dew).

Sotirios Stasinopoulos was one of the most gifted folk singers to have recorded in the first half of the 20th century and one of the most vibrant Greek singers ever to have recorded. Born in the small mountain village of Dafni in the district of Achea in the northern Peleponessus where the largest close town was Kalavryta (present-day population only about 2,000) on March 1, 1878, he followed his brother Vasillios (William) to the U.S. for the first time at the age of 27 on May 10, 1902 at Ellis Island with $12 ($350 in today’s money) in his pocket.

About half of the 500,000 Greek men who arrived in the United States between 1890 and 1920 came to earn money and then returned home. Stasinopoulos went back to Greece twice but then came back to the U.S. first in April 1905 when he said that he was a shoemaker and intended to go live with his brother-in-law Constantinos Kamakiotis in Orange, New Jersey where he subsequently worked as a barber and then again in 1912, when he arrived one last time. His 1912 immigration document, issued when he was 34, mentions a scar across his face. We don't know whether he was involved, but his later songs show strong political leaning that could have tied him to the onset of the Balkan Wars of 1912-13

Six years later in 1918, he was living at the southern tip of Manhattan at 20 Greenwich St, a section then overrun by Irish street gangs including the Hudson Dusters and only a block or so away from the stretch of Washington Street known as Little Syria, crowded with Arabic-speakers. He identified himself as a professional musician but was working for one George Calogeras, an importer about five years his senior who had spent four months in jail for tax evasion on the importation of figs.

Stasinopoulos recorded a trial disc for Victor Records accompanied by a house pianist on April 19, 1921 at the age of 42. Having passed the audition, he recorded four songs at a session in September 1921. One of the four, “Drousoula,” gave him trouble after three takes, and he returned on March 13, 1922, when, after five more takes, he finally cut a master. Within a few months, he had two discs on the market, and in October and November of that year, he recorded eight more songs for Victor.

He recorded for Columbia for the first time in 1923, cutting four sides, all of them issued and setting a pattern for the rest of the decade. Every few months from September 1924 until January 1929, he went into the studio and cut between four and eight sides for Victor, Columbia, or Okeh Records. Practically everything he recorded from that point on was done in one or two takes and was issued. He had learned a lesson from the 1922 sessions, arrived at the studio prepared and got the job done.

In total, he recorded 94 performances, all but the first four of them issued on relatively expensive 12” discs. We present here 20 of the 38 sides he made between September 1921 and December 1925 roughly in the order in which they were recorded. All of this material was recorded acoustically, which is to say before the advent of microphones. Although about half of the performances have circulated online for a few years, a half-dozen of those are available elsewhere too fast. (Victor discs before 1922 run significantly slower than 78rpm; playback at 78rpm is almost two whole-tones higher than the pitch at which they were recorded.)

His accompanists were largely established semi-professional players about a decade younger than Stasinopoulos himself, mostly from the Peleponnesian peninsula and all from smaller municipalities including Sparta, Kalamata, and Corinth - never from the cosmopolitan port cities. Several of them cut discs under their own names, although only he obscure clarinetist Tom Vrounas cut any discs at Stasinopoulos’ sessions. (Vrounas’ 1926 performances appear to the only instances of Stasinopoulos as an accompanist, playing lauto.) Many of Stasinopoulos’ accompanists also recorded with other significant Greek vocalists of the 1910s-20s including Madame Coula and Marika Papagika.

The most consistent accompanist among Stasinopoulos's 1922-25 performances was the santouri (hammer dulcimer) player Louis P. Rassias, who was born in Sparta May 2, 1884 and lived in Montreal for a short while before crossing to the U.S. by ferry to Detroit, where a warrant was issued and then rescinded for his arrest, then moved to Lowell, Massachusetts and finally New York City. When he declared his Intent to Naturalize as an American citizen in 1932, he was living at 404 W 35th St. a few blocks from the center of the Greek nightclub scene. He cut 13 sides for Okeh and Columbia on his own between 1929-29. After the Depression, he moved first to 860 N. 9th Ave and then where he worked repairing shoes and then uptown to 525 W 138 St.

Like many performers, the reorganization of the major record companies after 1929 pretty well ended Stasinopoulos's recording career. It’s clear that he continued to perform, although the only documentation we have of any of his live performances is of a gig at the Windsor Hotel in Montreal under the auspices of the Laconic Brotherhood, a Hellenic organization founded in 1936 and still operating today.

In the early- or mid-40s, he self-released a handful of performances on his own label with a photo of himself in full Grecian folk dress, a hand on his hip and a great mustache. He was at that point well into his 60s. The material he recorded then demonstrated a profound Hellenic nationalism unsurprising as an ex-patriot witness to the Balkan Wars and two World Wars on his country.

There is something deeply solitary and wonderful in Stasinopoulos’ voice. His subject matter is relentlessly tied to his origin in the rural mountains in a country that had only won independence less than 50 years before he was born in a struggle that originated out of his home district. He speaks for the mountaineers who fought and died for Greece. He is proud and inflexible and a great stylist with a masculine presence and a voice that emanates liquid sequences through these poems of rural life. He seems to embody something that is profoundly old - a spirit of Greekness that might well have existed a millennium ago. Somewhere in the mists of time at some table over emptied bottles of fantastic, hard vinegar, there was a Sotirios Stasinopoulos of some kind rhapsodizing and singing some old poem about a mountain or a hero or a tree or a mother or all four at once.

Where English translations of song titles were given on the original disc labels, we have retained those.

Examples of later Stasinopoulos performances can be heard on the Canary Releases To What Strange Place ("O Korakas," 1927) and Why I Came to America ("Metaxas," ca. 1940s).