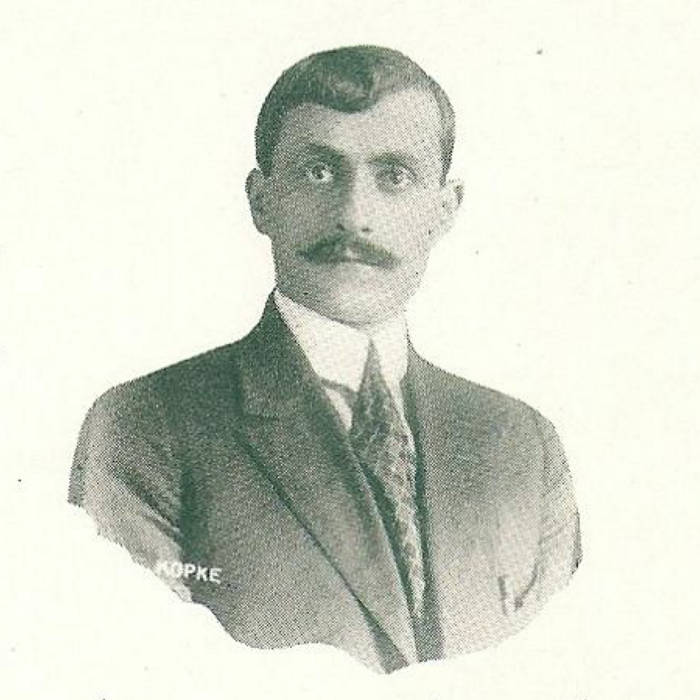 In the second half of the 19th century, troupes of Moroccans, Egyptians, and Syrians performed in the United States at tent shows, circuses, minstrel shows, vaudeville houses, and theaters as ethnographic/ exotic spectacles for American audiences. Several members of the first Syrian family to emigrate to the U.S., headed by a medical doctor named Yusuf Arbeely (b. 1828, five miles outside of Damascus) who arrived with his wife, niece, and five sons in August 1878, toured during the 1880s offering paying customers (25 cents for adults; 15 cents for kids) a chance to see people from the Holy Land in native costume. The 1893 Columbia World Exposition in Chicago offered many more Americans the chance to witness aspects of Arab and Turkish culture at its pavilions. (Three wax cylinders now at the Library of Congress, recorded in Chicago by Benjamin Ives Gilman on the morning of September 25, 1893 by four musicians from Beirut, totaling less than five minutes of sound, are, strictly speaking, the first sound recordings of Arabs made in the United States.)

Through the end of the 19th and beginning of the 20th centuries Syrian immigrants to the U.S. developed enclaves in about a dozen cities and towns in Massachusetts, Pennsylvania, West Virginia, Michigan, and New York. By 1920, over 150,000 Arabic-speaking immigrants from Greater Syria (the Ottoman districts of Aleppo, Damascus, Beirut, Mount Lebanon, and Jerusalem) established themselves in a variety of retail, service, financial, and manufacturing trades, especially the garment business. 40,000 more immigrants from the Syrian diaspora had settled in Canada and Mexico, 300,000 in Brazil and Argentina, and 40,000 more elsewhere in South America and the Caribbean. In the wake of the catastrophe of WWI, in which over 18% of the Syrian population died (including the famine that killed half of the population of Mount Lebanon in 1915-18), and the policies under French occupation in the 20s, most remained in the Americas rather than return home, as many immigrants had originally intended.

The first Syrian-American to have recorded in the U.S. was a composer and pianist named Alexander Maloof (b. ca. 1884-85) who arrived with his parents from Zahle (present-day Lebanon) in 1894. They applied for citizenship the following year. He was already publishing sheet music of his compositions as a teenager, had established himself as a music teacher in Brooklyn by 1905, and was performing in public in his 20s. His music often purposefully synthesized American and Syrian elements. In 1912, he copyrighted “America Ya Hilwa” (which he called “For Thee, America” in English) and campaigned for years to have it become the U.S. national anthem. In September and October, 1913, he recorded his ragtimesque piano arrangement of the traditional Ottoman tune “Aljazayer” and an original composition called “A Trip to Syria” (a trip that he himself never made). It is unclear whether the resulting disc was marketed to English or Arabic speaking audiences. In April 1916 a group credited only as “Syrian Band” recorded four sides for Columbia records in New York and were issued as part of their E (ethnic) series for the immigrant community. The hybridized style of those performances are similar to material Maloof's Oriental Orchestra recorded and self-released in the 20s. It seems reasonable to speculate that they were made under his direction. On his own label, his issued a wide variety of material by his own band as well as other immigrant performers. After folding the label, he recorded several more sessions for other labels in the 20s and 30s including Victor and Gennett Records in Richmond, Indiana. (Among them were a series of organ solos marketed to funeral parlors and roller rinks.) He produced piano rolls, performed on radio, toured widely, and continued teaching into the 1950s. Richard M. Breaux’s excellent biographical article on Maloof points out that when he died on leap day 1956 in New Jersey, his local obituary mentioned his efforts to transcribe and preserve Levantine folk music.

Arabic-language discs on various overseas labels were imported physically from Beirut and Cairo during throughout the 1910s by entrepreneurs including A.J. Macksoud who ran a series of music shops on and around Manhattan’s Washington Street in what was then Little Syria, while at the same time Victor Records issued foreign recordings domestically in the U.S. for the immigrant market. It was not until the Maronite priest Rev. George Aziz (b. 1872) recorded a single disc on May 15, 1914 in New York with violin accompaniment that the Arabic language was recorded commercially in the U.S. (Again we refer those interested in a recent biographical article on Aziz by Richard Breaux.) March 18 and 19 of 1915, the first Syrian recording star Nahum Simon began making discs for Columbia.

Simon appears to have been a professional shoemaker, born January 25, 1890. He seems to have tried to emigrate through Ellis Island initially in June 1904 at the age of 15, but after being detained for four days for medical reasons, was deported. He successfully entered the U.S. in 1912, settling on Atlantic Avenue in Brooklyn with his wife Rahill and their two American-born children Evaleen (b. ca. 1915) and Joseph (b. ca. 1917). Between March and September 1915, he recorded 12 discs, and then in 1916-17 another 21, all for Columbia. Their popularity catalyzed a wave of recordings of Arabic-speaking immigrants that took place over the second half of the 1910s. He did not however record again until the 1920s when he made 8 more discs for Victor Records (including two 12” discs) and 3 12” discs for Columbia. After a few appearances of WBBC’s Syrian Hour radio show in early 1933, we are unclear what happened to him.

The only other singers to have recorded nearly as prolifically as Simon during the 1910s and 20s were Selim Domani, who made at least 30 discs for Maloof’s label; Louis Wardiny (b. Beirut 1894; d. Beirut 1990), who made 6 discs for Victor on May 16, 1917 and another 25 discs for independent labels in the 20s (including Maloof’s); and Constantine Sooss (or Souse), who released 17 discs on Victor and Columbia during the period October 1917 to February 1920. (Again, Richard Breaux has written biographical studies of all three of them.) One factor ties together the recordings of Simon, Domani, Sooss, Wardiny, and (potentially) Aziz. They all include the violin accompaniment of Naim Karacand. My own 2500-word biographical article on Karacand was published at Breaux’s Midwest Majar blog, but here is a brief summary:

Karacand was born on September 2, 1890 in Aleppo, Syria, where he was raised Catholic. He arrived at Ellis Island October 10, 1909 and settled in Brooklyn, followed by his younger brother Hicmat and parents Abdullah and Susie. He was first married in 1912, and he and his wife Najeema had three children (1913-17) - the period during which he recorded scores of discs with Nahum Simon, William Kamel, Moses Cohen, and several others as well as about 10 discs under his own name or anonymously. His band at the time included Shehade Ashear (or Shehadi Ashkar, kanun) and Abraham Halaby (oud), both of whom were Halabi (Aleppan) Jews, or in some cases, oudist Toufic Gabriel Moubaid (born ca. 1887-88 in Tripoli, Lebanon). During 1921-22, he was involved in a protracted, bitter, and very public divorce that tore his family apart. He recorded prolifically through the 20s for Maloof and Macksoud labels.

His Declaration of Intent to naturalize as the citizen of the United States on July 10, 1923 was witnessed by his regular collaborator Toufic Moubaid and the dancer Anna Athena Arcus, a native of Mersin, Turkey five years his senior whom he later married. In 1930-32 Karacand worked as a music consultant on films in Hollywood, notably including Mata Hari starring Greta Garbo. In 1936-37, he traveled to Brazil for the wedding of his brother Chukri and performed there before returning to Brooklyn just after a retrospective concert of his work had been produced at the Brooklyn Academy of Music. He spent the 1930s and 40s playing WHOM’s Friday evening Arabian Nights radio program and performing constantly at gatherings of the Syrian-Lebanese community. He continued to record prolifically for independent labels through the 1940s and 50s in New York. Among his last recordings were in 1958 at jazz-Arabic hybrid sessions for Riverside Records under the direction of Ahmed Abdul-Malik, who was then bassist for Thelonious Monk. Following the deaths of his second wife and all three of his children, he died in Astoria, Queens in 1973 and is buried in Green Wood Cemetery in Brooklyn.

A composer and performer who was held in high regard in his community, Karacand’s repertoire and skill allowed him to play with a wide variety of performers from many backgrounds. Even among his earliest recordings on this collection, he plays a classical peshrev (“bishro”) by the Ottoman-Armenian Tatyos Effendi (tracks 17-18), urban Beirut/Cairo-style classical tarab (tracks 5-6 and 9-10), and Syrian rural folk deke dances (tracks 21-22 which were originally issued uncredited). His collaborators included Jews (including Moses Cohen, who we suspect was born in Aleppo ca. 1894) as often as Christians, and it seems he played with Muslim performers. (There were perhaps 600 Ottoman Muslims in New York City in the first decades of the 20th century.) In 1953-54 he hosted the Orthodox native Aleppan violinist Sami el-Shawwa, who'd had a parallel career to Karacand's in Cairo and Baghdad, having become the single most celebrated violinist of the Arab world in the first half of the 20th century. The two of them palled around for several months, jamming at weddings.

Between May 1914 and February 1920, Columbia Records issued a total of 70 discs recorded by Arabic-speaking immigrants before ceasing to record them altogether. Victor issued a total of 32 discs between September 1913 and July 1921 and persisted only sporadically through the 1920s. By and large the market gap for Syrian-American performers on record during the 20s was filled by the Maloof and Macksoud labels. This collection represents about 5% of the total output for the time-period it covers. Although this collection lacks certain key performers (Souss in particular), was sourced from acoustically recorded discs in very mixed condition from over a century ago, and needs biographical details for two of its performers (William Kamel and Moses Cohen), I hope it serves as window into in the musical world of a remarkable American immigrant community deserving of more attention.

Cover photo of Nahum Simon. Thanks to Harout Arakelian.

Transfers, restoration, and notes by Ian Nagoski, 2017-2021
Thanks to Richard M. Breaux whose ongoing research into early 20th century Arabic-speaking immigrants can be found at syrianlebanesediasporasound.blogspot.com

Thanks also to Steve Shapiro, Nancy Karacand, and Jorge Khlat.