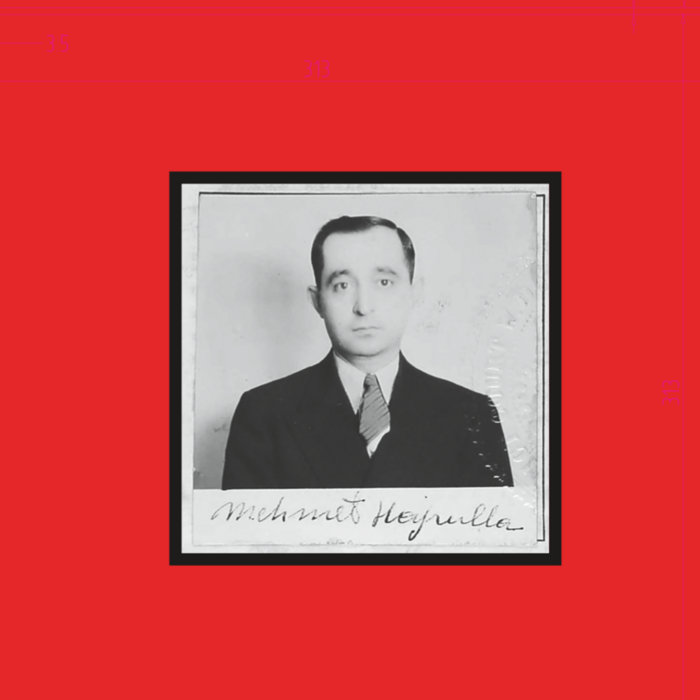 Ajdin Asllan was born in Leskovik near the present-day southern border of Albania on March 12, 1895. At the age of 30, on July 12, 1925, he married a girl named Emverije, who was one month shy of her 16th birthday, in her native town Korçë, about 80 miles north. He arrived in New York by himself less than a year later on September 20, 1926, and when he filed his Declaration of Intent to become an American citizen in 1928 as a resident of Detroit, he gave his occupation as "musician." Emverije joined him in New York City on July 27, 1931.

Asllan appears to have made his first recordings in November 1931 as a clarinetist on four songs issued as 12” discs by Columbia sung in Albanian by K. Duro N. Gerati. In January 1932 he recorded again, this time singing and playing oud on three Columbia 12”s along with several Albanian singers and the violinist Nicola Doneff (born March 21, 1891 Dichin, Bulgaria; died July 19, 1961 New York). In 30s Asllan launched an independent label called Mi-Re (roughly “With New” in Albanian) Rekord primarily to release his own recordings, but it stalled out after about 6 releases. In October 1941 he accompanied a Greek singer and songwriter named G.K. Xenopoulos as an oudist along with the beloved Greek clarinetist Kostas Gadinis and accordionist John Gianaros for the Orthophonic subsidiary of Victor Records run by Tetos Demetriades. The trio of Gadinis, Asllan, and Gianaros cut another four sides for Orthophonic May 1, 1942. Shortly thereafter, Asllan relaunched his label as Me Re with the help of Doneff and then quickly renamed it, more generically, Balkan. Gianaros came in as a business partner, and Balkan released scores of records, some of them seemingly selling thousands of copies in the mid-40s, but Gianaros split angrily with Asllan after just a few years over money problems.

By 1947, Doneff had trademarked the Kaliphon label, which drew from much of the same roster of New York musicians of the Greek- and Turkish-speaking performers as Balkan and apparently collaborated in distribution, marketing, and manufacturing into the 1950s, but some business distinction had been drawn. A third label, Metropolitan, was launched and became at catchall for further Greek, Turkish, Armenian, and Ladino material by New York players, but it's not clear who was in charge or how things were divided up. Maybe Metropolitan was started by Asllan as a separate business to dodge the taxman or old creditors? We don’t know. All three labels shared a standard black-on-red color scheme that, it would seem reasonable to guess, was based on the Albanian flag and Asslan’s original, core purpose as an artist and impresario.

Adjin and Emverije lived during the 1930s into the 50s first at 143 Norfolk St. and then at 42 Rivington St. (where Asllan opened a record shop), in Manhattan's Lower East Side, where Eastern European Jewish immigrants surrounded the small Albanian community and Turkish-speaking Sephardic Jews, and abutting Little Italy and a strip of Greek coffee houses on Mulberry Street. He worked within a network of primarily Turkish- and Greek-speaking performers in New York and released recordings prolifically made both locally and overseas through the 40s and 50s. He corresponded with his brother Selim (who sings on track 1, side A, later worked on the radio in Tirana and co-founded the National Ensemble of Folk Songs and Dances) back home, who was able to secure masters of Albanian performers recorded in Istanbul and Athens along with performances by Turkish- and Greek-speaking stars including Rosa Eskenazi and Udi Hrant (both of whom subsequently made extended visits to the U.S.)

Greeks and Armenians had, even at the low ebb of immigration during the 1940s-50s, substantial immigrant populations in New York and around the country - Boston, Chicago, Cleveland, and many other cities. Those markets kept the Balkan label afloat for nearly 20 years. But Asllan also issued about 40 discs for the Albanian-language market ca. 1945-50 (at which point he retained a 500-series numbering scheme for them, picking up where he’d left off with his Me Ri label a decade earlier), including both folk music of southern Albania and choral music, much of the latter anti-Fascist Communist songs. In addition, three discs were issued as part of Balkan’s Greek series of uncredited musicians from Pogoni and Konitsa, towns about 30 miles south as the crow flies from where Asllan was born. The total Albanian-speaking population in the U.S. at the time was less than 10,000, and many couldn’t afford record players. But despite the small market for Albanian-language songs, he made sure to release discs for his countrymen. It was a time of immense political and social turbulence in both Albania and Greece, and the sense of duty to music is palpable in his work.

Balkan’s business model was haphazard. Its numbering system, if one can call it that, indicates a tendency to start a series, then add to it - or not - sporadically, driven largely the question, “can we sell 500 of these? (And if so, can we sell 1000?)” The last Balkan 78s were issued around 1959; a few LP releases appeared around 1960, more than 20 years after Asllan released his first discs. We know he visited his native home and family in 1951, 25 years after having become American. He died in New York in October 1976. He had no children, save the records.

We have so far been able to trace a biographical narrative of only one of the other immigrant performer among those who play on this collection, Chaban Arif, who apparently sings on track 9.

He was born May 22, 1899 in Berat, Albania, attended school through the second grade, and arrived alone at Ellis Island on November 2, 1920 at the age of 19 under the name Aril Shaban. His intention upon arrival was to meet up with a cousin, Mahomet Hajrules (who, in turn, had arrived only six months earlier under the name Mehemet Airula) in Southbridge, Massachusetts. However, there was a family of four from Shaban’s hometown on the same steamship who were headed to Pittsburgh, Pennsylvania (via a stop first at the south Philadelphia home of a relative), so Shaban wound up in Pittsburgh.

He filed his first papers to become a U.S. citizen in Canton, Ohio in 1925, but he had returned to Albania in June of 1928, where he married an 18 year old woman named Nadire, and by 1931 had returned to Allegheny County, Pennsylvania, where he was working at the Duquesne, Pennsylvania Carnegie steel mill. (When his cousin Mehmet Hajrulla filed his Declaration of Intent to naturalize as a U.S. citizen in 1937, he was a widower living on Braddock Ave. in Pittsburgh and working as a painter.)

The 1940 census found Shaban Arif relocated to 55 Clinton St. on the Lower East Side of Manhattan, about seven blocks from Adjin Asllan’s place on Rivington. Arif told the census enumerator that he worked 60 hours a week, 52 weeks a year for $916 a year (about $17,000 a year in today’s money) at the counter of of a restaurant. The man he listed on his WWII draft registration card as his closest contact was named Kardi Braim, who gave his country of origin either as Albania and Macedonia on different documents, had himself worked for a brick manufacturer in Erie County, Pennsylvania in addition to a string of other laboring jobs and worked at the time at Stewart’s Restaurant. It would seem reasonable to guess that both Shaban Arif and Kardi Braim were in Adjin Asllan’s limited social circle of Albanians in the neighborhood in the early 1940s when he recorded on this song. The $1 that the disc cost could have represented three and a half hours of labor at the restaurant.

We know nothing else of Shaban Arif’s life except that he died in New York City in September, 1971. (Kardi Braim died in 1978.)

Transfers, restoration, and notes by Ian Nagoski.
Layout and design by John Hubbard.

Please note that we have retained the spellings of the track titles and artist names from the labels of the original discs rather than modifying them to contemporary transliterations.

Thank for loans of discs by Kevin Barker and Matt Laferty.
Thanks to Chris King and Harout Arakelian.