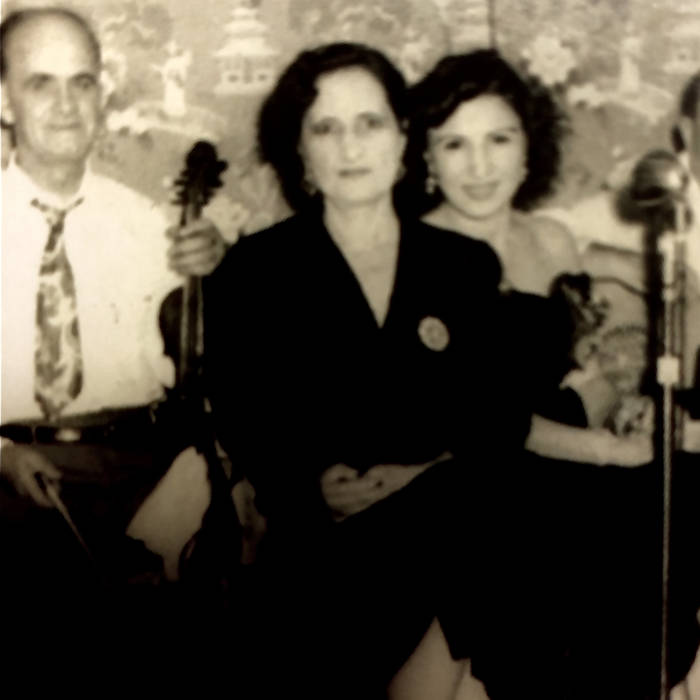 Amalia Bakas was born Mazaltov Matsa in 1897 in present-day Ioannina, Greece (then Janina, Turkey). She was part of a 2,000 year old community of Romaniote Jews from Ioannina. Since the holocaust, their population there has dwindled to only dozens of individuals. Amalia was apparently the only Romaniote Jew to have ever recorded, albeit in the New World.

A beautifully researched biographical essay by David Soffa appears in the notes of the CD that he produced of her, Amalia!: Old Greek Songs in the New Land, 1923-50 (Arhoolie, 2002). Despite my best efforts to add to his work, I have largely failed to improve upon it. What follows is drawn almost entirely from his research.

She was sent to the U.S. at 15 years old in 1912 and just under a year later, she was married to Jack Saretta with whom she had two daughters Esther and Diamond (b. July 23, 1918). They lived in the Jewish Lower East Side, close to the Romaniote synagogue on Broome Street (the only one in the Western hemisphere). Mally, as she was known to her friends and family, worked initially in a garment factory, but by her early 20s she was earning a living singing in the emerging coffee houses and nightclubs patronized by Greek and Turkish speaking immigrants.

By about 1922, she had started recording under the names Amilia or Amelia, initially ten sides for the small independent labels for the New York Armenian-owned Parsekian and Sohag labels and then six sides for the Chicago-based Greek Record Company. Her career as a performer was far removed from the traditional role of a woman in her community, and her husband divorced her and sent her daughter Esther away to Greece. Diamond later used the word “kidnapped” to describe her sister’s removal. Diamond and Amalia remained very close, often working together in nightclubs and touring as a duo. In her younger years, Diamond’s babysitter was an emerging star of Greek music in New York, Marika Papagika. (Amalia had a short-lived cafe of her own on 8th Avenue around 1930, just around the corner of Papagika’s club.)

It is not out of the question that it was Papagika who brought Amalia to Victor Records, where she recorded 10 12” discs between April 1927 and February 1928. By that time, Amalia had converted to the Greek Orthodox Church to marry Gus Bakas (b. 1889; arrived in the U.S. 1910) and had taken his surname. In early 1929, she made three more 12” discs, this time for the Okeh company, accompanied by the brilliant violinist Nishan Sedefjian (with whom she worked off and on for decades) and cymbalom player Louis Rassias.

Amalia and Diamond spent the Depression playing the “oriental” nightclubs of 8th Avenue and touring - Detroit, Gary IN, Philadelphia, the Catskills, and Chicago - often with the guitarist, singer, and composer George Katsaros. An exceptionally independent woman, Amalia lived the nightlife, gambling and swearing with the men and performing flirtatiously. By 1940, she was living in Chicago’s Greektown, but within a couple of years, she moved back to New York and started recording again for the Balkan/ Metropolitan circle of labels for whom she made at least seven discs with a rotating cast of accompanists. She and Diamond performed as a mother-daughter act until 1960 when Diamond moved to Tarpon Springs, Florida where she opened a restaurant. Amalia retired from performing in the early 1960s and joined Diamond in Florida in 1974. She died there in 1979. Diamond died March 13, 2013.

=======
Sarah Behar recorded only two songs - one disc - some time in the 1940s. At least three different women by that name, all born in Turkey between 1899 and 1910, appear in the 1930 and 1940 census records in the Bronx and Brooklyn. Two of the three were native speakers of Ladino, the uncommon dialect of Spanish specific to Sephardic Jews of parts of Turkey and Greece. (The language was brought to the Ottoman Empire during the late 15th expulsion of Jews from Spain.) For the time being, we remain unclear who she was.

=======
IIn the 1940s Victoria Hazan recorded eleven songs in Turkish (plus one as a backing vocalist for Marko Melkon), two in Greek, and ten in Ladino. The Ladino language discs remain relatively scarce but fortunately can be heard on YouTube and were issued on a CD of her complete works titled Todas Mis Esperansas (Global Village, 2001). The thumbnail biography of Hazan at the sephardicmusic.org remains the best published source, although we hope to expand on it in the near future.

She was born April 15, 1896 in Salihi, Turkey. Her family (two siblings and her parents Moshe and Rivka Ninio) moved 100km due east to the port city of Izmir when she was 15 and then to New York City in 1920, shortly before the September 1922 catastrophe killed tens of thousands of Greeks and Armenians. From about 1925 to ’36, she was married to Israel Hazan. She sang and played oud in her synagogue in the Bronx. When it was initially suggested that she should make records, she saw no reason to, saying that her husband “made a good living.” After her first husband’s death, she remarried Joe Rosa, and with his permission, she recorded for the Kaliphon and Metropolitan labels with Marko Melkon (who was just a year or two older than her and from Izmir near Salihi himself) and his circle accompanying her.

She continued to sing within her community until her death in Brooklyn, November 21, 1995. She’s buried near family in Cincinnati, Ohio.

We have retained the original transliterated spellings of Greek and Turkish from the disc labels.