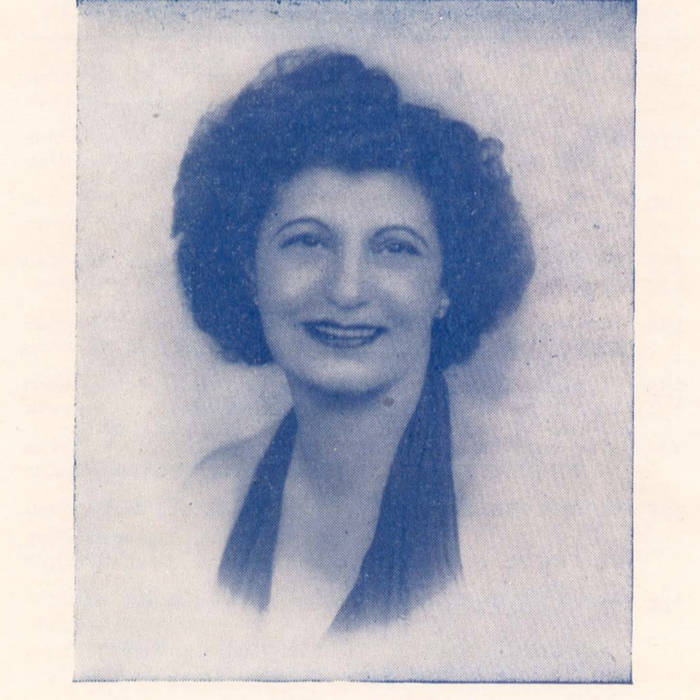 Very little is known about Virginia Magidou. Her name appears on no public records that I have been able to locate, and I have assumed for years that it is a stage name. The Greek music and dance expert Joseph Graziosi has suggested that her last name is, in fact, Μαγκιδης, a name not uncommon in the Marmara region of north-western Turkey.
We know that she sang on about 28 Greek-language sides and 2 Turkish sides for the Metropolitan and Kaliphon labels (as well as a few sides on a related label named for her) in New York City in the mid-1940s, accompanied by violinist Nicola Doneff .(b. 1891, Dichin, Bulgaria), guitarist George Katsaros (b. 1888 Amorgos, Greece; d. 1997, Tarpon Springs, Florida), accordionist John Gianaros (b. 1904 on a boat en route to Pireus, Greece; d. 1998, Tarpon Springs, Florida) , oudist Marko Melkon (b. 1895, Smyrna, Turkey ; d. 1963 in New York), clarinetist Coastas Gadinis (b. 1890, Macedonia), kanunist Garbis Bakirgian (b. 1884; d. 1969, San Fernando, California), and others of the social circle . She appeared as an accompanying vocalist on a few other sides by Tasos Eleftheriadis. From the few photos that we have of her, and the circumstantial evidence of her peer group, we can guess that she was born roughly 1890-1900.

The majority of the information that we have about her comes from a seven-minute segment of the three and a half hours of interviews that Steve Frangos conducted with John Gianaros on November 17,1986 (available on the Florida Memory state archives site at: www.floridamemory.com/items/show/236618 ). In that interview, Gianaros gives a number of interesting memories of Virginia Magidou, of whom he is clearly deeply fond as a person and for whom he has deep respect as a performer, saying emphatically, “she was the best singer in New York! She was the top singer in Turkish.” Gianaros says that she lived on 8th Avenue in Manhattan between 28th and 29th Streets (less than a block from the Port Said club where Nick Doneff, Mary Vartanian, Marko Melkon, etc. often played). He says she often performed with the Greek singer and record producer Koula Antonopoulos. He says that Magidou’s father was Armenian and mother was Greek, that she sang not only in Turkish and Greek but also Armenian and Bulgarian, and that she was married twice – first to a Cypriot sailor named Tony (he gives no last name.) and later to an unnamed American. Asked if she was still alive at the time (in 1986), Gianaros asserts that she was but that she was blind, offering an anecdote on her recording habits as the cause of her blindness:

"I’ll tell you how she got blind. Any time it was to go into the studio for her to sing, he [the studio owner, an Austrian violinist] use to bring a gallon ouzo. Now the men who was in the machine there and his wife, they started laughing. […] Because Virginia, if she didn’t drink the half gallon, she couldn’t sing. She have to drink a half-gallon and then to start singing! They used to tell her, 'Virginia, did you leave anything for us?' She say, 'I left you half-gallon,' and she would start singing. That’s right! Half-gallon! And that thing was going six, seven times a year."

Ouzo is produced at an alcohol content level of about 50%, although it is often drunk watered. If she drank it unwatered, it would be roughly the equivalent of drinking about a quart of bourbon or a gallon of wine. That level of drinking could certainly have lead over time to macular degeneration. It may well also have gone some way toward explaining why a singer who was held in such high regard recorded so little, particularly during the 1920s when her contemporaries Koula Antonopoulos, Marika Papagika, and Amalia Bakas were all recording prolifically.

Asked by Frangos about her character, Gianaros raved: “She was the best humor person! She… how can I tell you? If she knew it that you need help, she could put up her pantalones and sell it to give you the money. That kind of person.”

“Mortissa Gennetheka” (originally recorded by Rosa Eskenazi, translation by Bobby Damore)
Aaach, I was born a tough chick, I’ll die a tough chick
Because I didn’t find more beauty to make of this life.
I like the tough life, and if I’m lucky I’ll be rich.
In this lying world, I’ll live even tougher.

Chrous:
Bring santouris and violins, ouzo to get drunk.
This false world, I just want to party in it.

Aaach, I would like to have a man who feels, a tough guy, or gangster.
To be the love of the crazy guys who are a little troublesome,
That’s how I like the men who feel, and if I’m lucky I’ll love one.
In a tough guy’s lips, my eyes will close.

"Tsiapkina Amerikana” (translation by Geroge Sempepos)
I spend the night straight through daybreak with the American chick
She's stolen my mind, that super-fine beautiful lady

My Amerikana tsakpina, come to your senses
And don't force me to become a murderer in your neighborhood!

Transfers, restoration, and notes by Ian Nagoski.
Thanks: J.T. Stewart, Nick Moschovakis‎, Aydin Chaloupka, Bobby Damore, George Sempepos, Steve Frangos, George Niarchos, Rich Pell, and everyone who has contributed to the ongoing Don't Let Me Be Lost to You project.