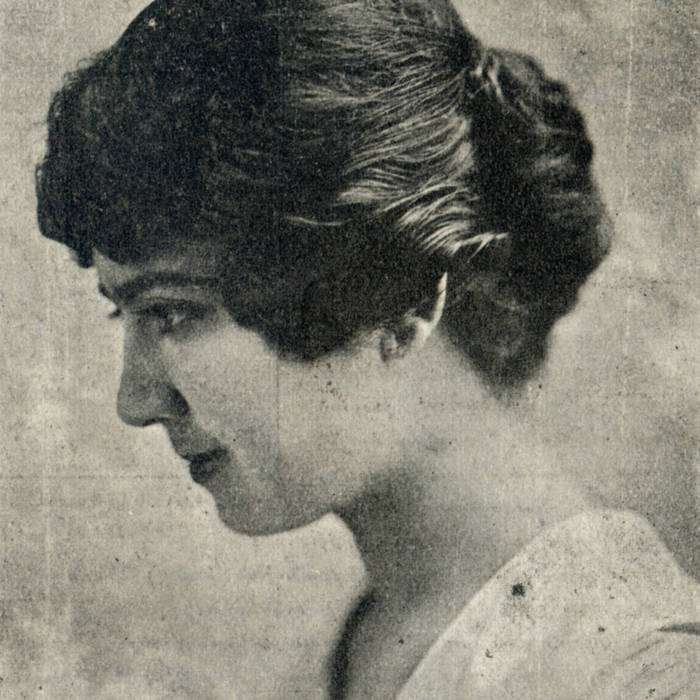 Logosophia If you have a heart, Zabelle's voice will crack it open to show the inner heart...if you don't have one, she might plant a seed to grow one...

vaddep That voice is just piercing and shatters your will to be and all that you wish to do as it bursts out and wraps itself around your heart while suffocating it. It is as if that voice summons spirits both dark and light.

Zabelle (sometimes Zabella) Panosian was born Takouhi Der Mesrobian June 7, 1891 in Bardizag (present-day Bahçecik) Turkey where she received her primary education at the Shoushanian School and first sang publicly at the age of 10 at St. James (Soorp Hagop) church. Even as a child, she took on roles of leadership and nurturing, directing a group of girls in liturgical singing as well as working as an assistant at a kindergarten.

She was third of four children, all of them born in Bardizag. Their mother died when Zabelle was about 11. Each her three siblings arrived in the U.S. separately during the period 1907-1911. Her brothers Mesrob (born in January 2, 1881; died November 1977) and Hachig (born September 15, 1885; died 1956) were both tailors and life-long bachelors who mostly lived and worked in New York City.

Zabelle was the first member of her family to emigrate to the United States. She was sent at the age of 16 in April 1907 to marry an enterprising photo-engraver from Bardizag named Aram Sarkis Panosian. (Coincidentally, the kindergarten where she had worked as a girl was named Panosian, and it may be that the marriage was arranged through her employers there.) He was born April 28 in either 1880 or 1877 depending on which document can be believed, making him between 11 and 14 years her senior. He arrived in the U.S. April 1896 and had a long, productive, and very successful career as an engraver with the Tichnor Brothers, significant figures in the development of the picture post card, starting around the time he and Zabelle were married. When Zabelle’s sister Nevart married Megurdich Mikaelian, Aram put him into business at the Tichnor Brothers’ Company. By 1916, Aram had gone into partnership with the Tichnors in the King Engraving Company for whom he was Vice President. He was naturalized December 31 1917.

August 29, 1908 their daughter Adrina was born in Somerville. Zabelle had just turned 18 the month before. By the Spring of 1910, the Panosian family were living at 91 Pearson Avenue in Somerville, Massachusetts in a house shared with another Armenian family, Hovannes Selian, his wife and two small sons. They lived there certainly through 1917.

Following private tutelage in English and about two years learning music under two teachers whose names she later gave only as Hooker and Graham and with whom she said she learned “practically nothing,” Zabelle began studying around 1915 with Gertrude Dueheana (born April 1873). Duehana was a professional teacher of vocal music in the Boston area for several decades. She described herself as the pupil of one Signor Olivieri (of whom we have not found other references) and gave regular recitals of her students. The influence of Dueheana from whom Zabelle remarked that she learned the “delicacies of the art” of singing coincided with Aram’s upward financial mobility and their resultant entry into Boston society and the massive swell of interest in grand opera in the United States, which Zabelle witnessed both from the stage and from its wings.

By 1910, three opera houses were operating in New York City, and further houses sprung up in Philadelphia, Chicago, and Boston. The short-lived Boston Opera Company and its House were the overblown and unrealistic scheme of of German-born financier Otto H. Kahn (born February 21, 1967; died March 29, 1934). Between 1909 and 1914, it presented only 88 concerts in Boston (along 47 others in off-season tours elsewhere). During that brief time, however, it brought some truly great performers to Boston including the sopranos Nellie Melba, Maggie Teyte, and Luisa Tettrazini.

Zabelle Panosian never had a credited role in the Boston Opera Company but at some point managed to get a spot singing in the chorus. It’s unlikely that she ever sat in a box seat for a performance or knew anyone who did. but for the rest of her career she was billed, rather pretentiously, as being “of the Boston Opera Company.”

In late March or early April, 1917, she recorded four songs in Columbia’s studios in the Woolworth building on Broadway and was given the exceptional luxury of recording as many as seven takes during her recording sessions. It was common practice to record no more than three takes of any given performance by immigrant musicians, and the vast majority of recordings for Columbia's E (ethnic) series were made in one or two takes.

We do not know whether she had any relationship with her peer Torcom Bezazian, who began recording for Columbia with success in February, 1915 and released nearly 80 performances on Columbia, Victor, and Edison labels before his recording career ended in 1921. We do know that she was close to the great singer Amenag Chah-Mouradian, having toured with him in the late 10s in benefit of the Near East Relief Campaign. (There is photographic evidence of an appearance by the two of them in Syracuse, NY.) Chah-Mouradian himself made a string of iconic discs at Columbia’s studios starting in May, 1917, and Panosian recorded her "Tzain Dour Ov Dzobag" at a June 1917 session when he also seemingly recorded two songs.

In 1870, there were fewer than 70 Armenians in the United States. About 100,000 arrived in the U.S. following the Hamidean massacres between 1894 and 1914. Between the onset on WWI and the passing of the Johnson-Reed act (which restricted immigration, allowing only 100 Armenian a year to enter the U.S. until 1952), another 30,000 Armenian arrived. Of those in the U.S., in the mid-10s, most came to the shattering realization that not only was there no longer any home to go to, but that everyone they had left behind was likely dead, as a million Armenians had been slaughtered. Meanwhile, the U.S. formally declared war with Germany on April 6, 1917, and the Ottoman Empire, having sided with Germany, formally severed diplomatic ties with the U.S. on April, 20th.

Only weeks earlier, Zabelle Panosian recorded her first sides, including her masterpiece, "Groung." I first heard it about a decade ago on a broken copy of the disc and worked for days, obsessively, to restore it, ultimately publishing it on my compilation To What Strange Place in 2011. Tens of thousands of people have heard it since then, and, as a direct result, it was arranged for strings and played by the Kronos Quartet in both New York and Yerevan a couple of years ago. Even so, little of Zabelle has been paid attention to.

“Groung” was the first of her recordings to be released and far and away her best-seller. Columbia kept it in print through numerous pressings until 1931 when they stopped selling Armenian-language material. It spoke directly to the dilemma of Armenians in the U.S., stranded by the chaos back home. The words are:
“Crane, where are you coming from? I am servant of your voice. Crane, have you not news from our country? Hasten not to your flock, you will arrive soon enough! ”

Presented here are five of the six songs she recorded in March-April, 1917. (The remaining title “Kilikia,” was apparently issued as the B-side of some, but not all, copies of her performance of “Mi Lar Pibool,” the following year.) Also presented are alternate takes of “Groung” and its flip side, which were apparently scheduled for release as relatively expensive 12” discs. 12” copies have not surfaced, if they were ever issued. Instead, we find the performance was issued on 10” discs, nearly identical in appearance to the other take, at a faster speed in order to cram the longer duration on to the sides. (This is the only instance of the practice that I have ever encountered in my 20 years of collecting and studying 78rpm discs; I would be interested to hear of any other examples of this practice.) We have presented these amazing performances at their correct speed.
She recorded only four more sides in June 1918 the following year. They did not sell as well.

In 1920, Zabelle Panosian applied for a passport at age 29, to visit France to study (likely with the great patriarch of Armenian music, Komitas Vadarpet, who composed or arranged at least four of the songs presented here; Harout Arakelian has found a Variety notice stating that she organized a concert at Salle Pleyel in Paris in June, 1922), to Italy to see her brother, and to England and Egypt to “locate lost relatives.” Robert Karayan has noticed that she was profiled in an edition of “Hai Guine” (Armenian Woman), the first feminist bi-monthly journal of Istanbul, founded, published, and edited by Hayganouche Mark from 1919-33. Panosian and her daughter returned through Ellis Island two and a half years later on Jan. 23, 1924, from the port of Cherbourg, France, to her husband at 520 W. 183rd St. in Manhattan. A few years later, she made another trip with her daughter Adrina.

She and her husband had three children. None of them had children themselves, and all of them are dead. Zabelle Panosian died in 1986. Her career was long forgotten. We have, at this point, five photographs of her.

In memory and admiration, 100 years later.

ADDENDUM: Harry Kezelian has just turned up a huge amount of material on Zabelle Panosian (including two new photos - one here: ovenk.com/zabel-aram/), starting with his having noticed a bio for her in a 1940 issue of the Armenian language Daroni Ardziv magazine, in which it is made clear that she used the stage name Zabel Aram. From that, he found a bunch of stuff, including her teacher's name (we still need to get the spelling right), and a mind-blowing reference in Marian Mesrobian MacCurdy's book Sacred Justice: The Voices and Legacy of the Armenian Operation Nemesis, stating that Zabelle performed at a 1919 banquet at the Copley Hotel in Boston in honor of a delegation from then-independent Armenia including its Prime Minister Kachaznouni, Calvin Coolidge, Alice Stone Blackwell, and General Antranik. Holding the flag of the Armenian Republic, Zabelle sang "Groong" "to thunderous applause." Photo-documentation apparently exists.

We also now know from Alice Navsargian's Book Armenian Women of the Stage that Zabelle was a huge star in Europe, having toured from London, Manchester, Paris, Greece, Egypt, Geneva, Rome, and Milan, where she received the "Serata in Honore" award at Opera La Scala, among others, and that she had a repertoire that included Schubert, Monteverdi, Verdi, Puccini, Bizet, and Rossini. And we know for sure that she met Komitas in Paris in 1920 and wrote about the experience in an article in Veradznoud.