And Two Partridges II: From the Earliest Turkish, Armenian & Kurdish Language Recordings in America, September 1915 - May 1916 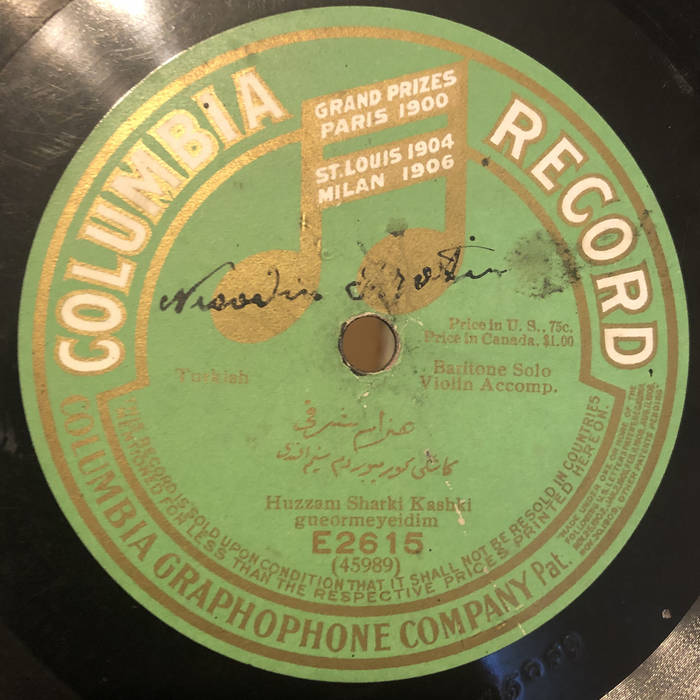 The first recordings in America for commercial release in the Turkish language were 19 songs made by Columbia Records in New York in September and October 1912. (See And Two Partridges vol 1.)

There were no more Turkish language recordings in the U.S. until September and October 1915 when Sinem Effendi recorded ten more sides (including two instrumentals by violinist Avny Bey, who I believe was a Sephardic Jew, and two duets with Leadet Hanim, the first woman to sing in Turkish on discs in the U.S.) Two more sides in Turkish were made in December 1915 and then another eight in January 1916 (at least one of which, by the Assyrian singer Kosroff Malool, was in Kurdish).

Of the 38 sides recorded during this nine-month period, we are able to present 26 here.

From mid-1916 onward Columbia increased its production of recording of immigrants from the Ottoman Empire generally, producing scores of records in Turkish, Arabic, Armenian, and Ladino, and its main rival Victor Records entered the game, producing its own recordings of Ottoman immigrants, until 1919 when both labels ceased to market domestic recordings to those ethnicities. Shortly thereafter, small, independent labels, including most notably that of the Armenian entrepreneur M.G. Parsekian, quickly filled in the market gap for Turkish-speakers.

These recordings were made acoustically. That is to say, they were made through purely mechanical methods, a decade before the introduction of the microphone. We have made only light restoration to the sound and present the performances largely as they were found on deeply flawed discs. We assume that their historical interest will be appropriate to the venue, making them available to those interested at a negligible cost.

All performances are in Turkish except 13, which is in Kurdish, and 17, which is in Armenian.
The recordings are presented chronologically in which they were recorded. All are first takes.

Credits and titles are given as they were on the original disc labels and within the files consulted by Richard K. Spottswood for his discography Ethnic Music on Records: A Discography of Ethnic Recordings Produces in the United States, 1893 to 1942, Volume 5: Mid-East, Far East, Scandanavia, English Language, American Indian, International, and subsequently in his May 2020 online list of the Columbia E Series, 1908-1923.

Many thanks to Christine Gabaly for her contribution in memory of her grandparents Setrak and Siranoush Aijian.